Fun Things to do With Toddlers - Snow Theme Activities 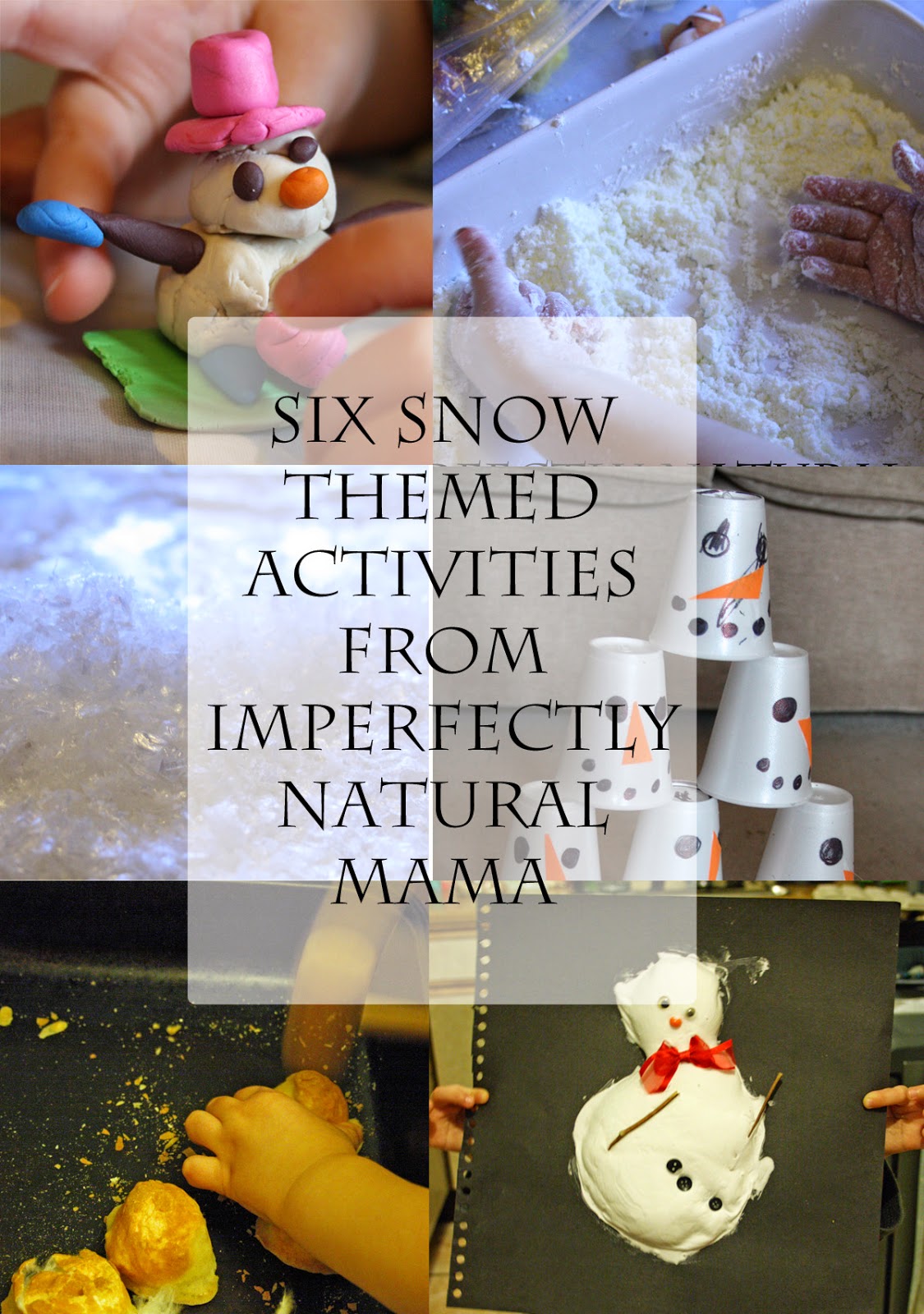 My husband and I have decided that we will most probably be home educating Boris and Biscuit in the future.  Of course home education doesn't start when a child turns three, or four or the term after their fifth birthday or whenever the local authority says it should,  Home education happens all the time and we are already doing it every day of the week.
Sometimes, however, I get a bit overwhelmed and worried about the responsibility.  I don't want to let my boys down; neither of them go to nursery at the moment so their education is already solely in my hands, and I get all panicky that I am not doing enough and I don't know where to start, so I have joined a ton of Facebook groups for support and encouragement and to ask questions (What would I do without my beloved Facebook?).  One group I recently joined is called "Weekly book and activity challenge for HE".  Every few weeks they have a new book/theme to follow and members share photos of what they have been up to. I liked this idea because it gave me something to focus on with the boys, I was getting myself into a bit of a muddle.
The first theme was The Snow Queen/Frozen.  So I borrowed a copy of the Snow Queen from the library, we watched Frozen and we did some snow themed activities.  Here are some of the activities we did.  This theme is totally still relevant, I was so hoping it would snow, but it wasn't to be, but it would be awesome to do some of them if it was also snowing outside.

1. First we made little plasticine snowmen from plasticine that Boris got for Christmas, I did most of the building here, but Boris told me what colours he wanted for what and what clothes he wanted his snow people to wear.  I love that he made me make babies for them. 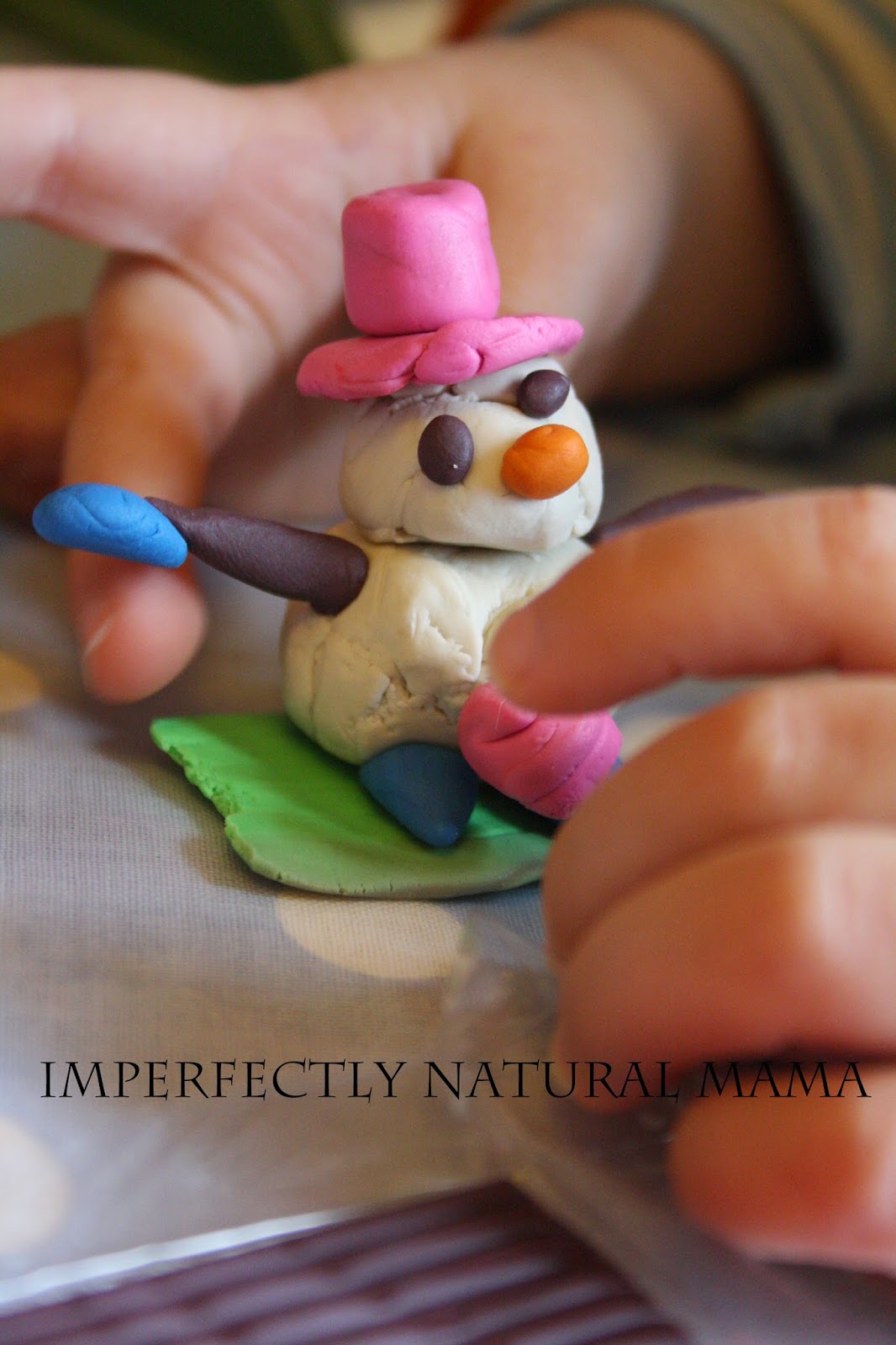 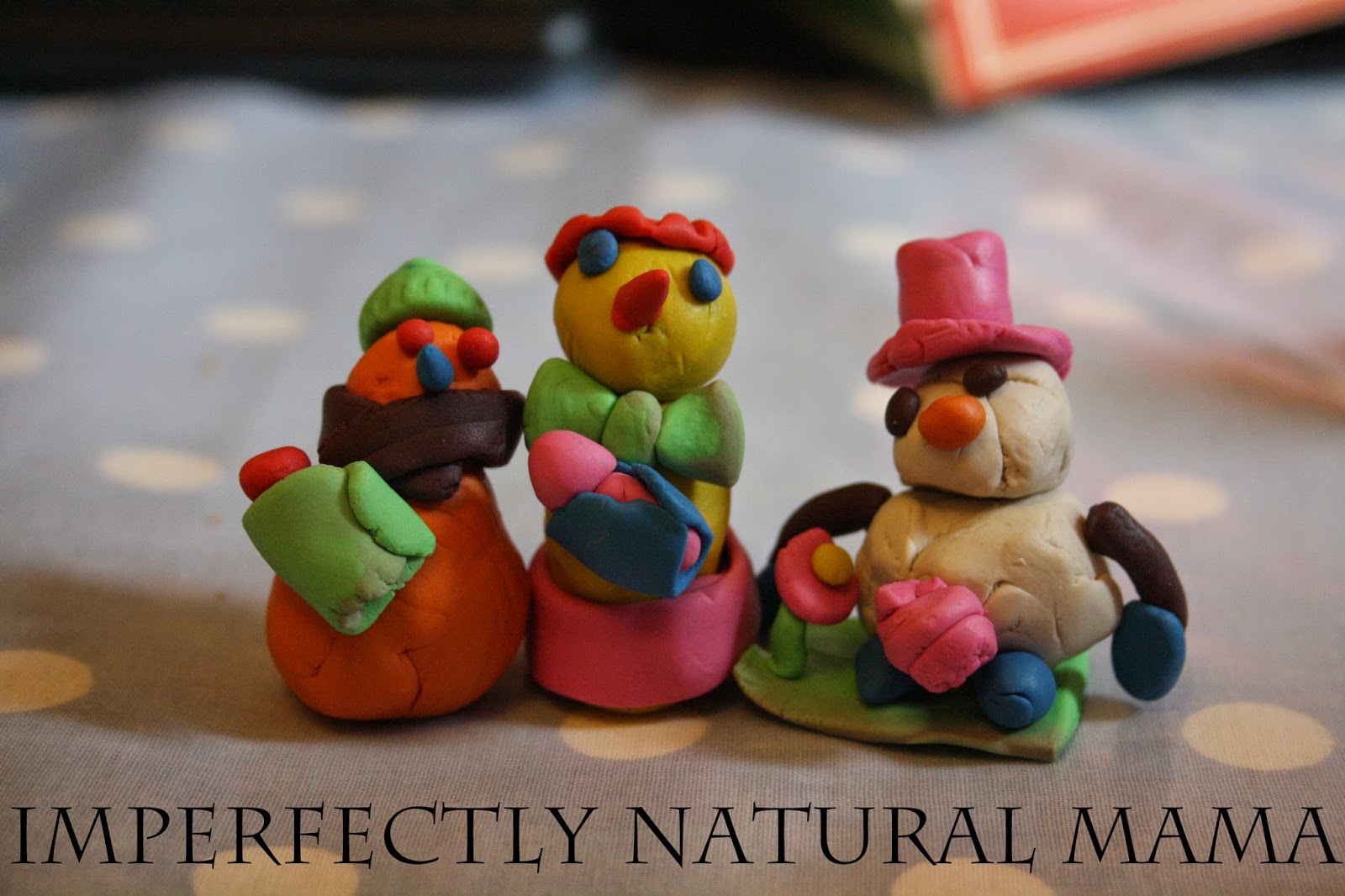 2.  The old corn flour and oil snow activity which we have done before only this time I used baby oil instead of rapeseed oil so our snow was white rather than the slightly peculiar looking yellow snow we had last year!
The mixture of the two ingredients (1 cup of each I think) results in a snow that is crunchy and mould-able, just like real snow, you could even put it in the fridge to make it chilly for the full sensory experience.
I am not going to lie, this activity ended up with shouting and hoovering. 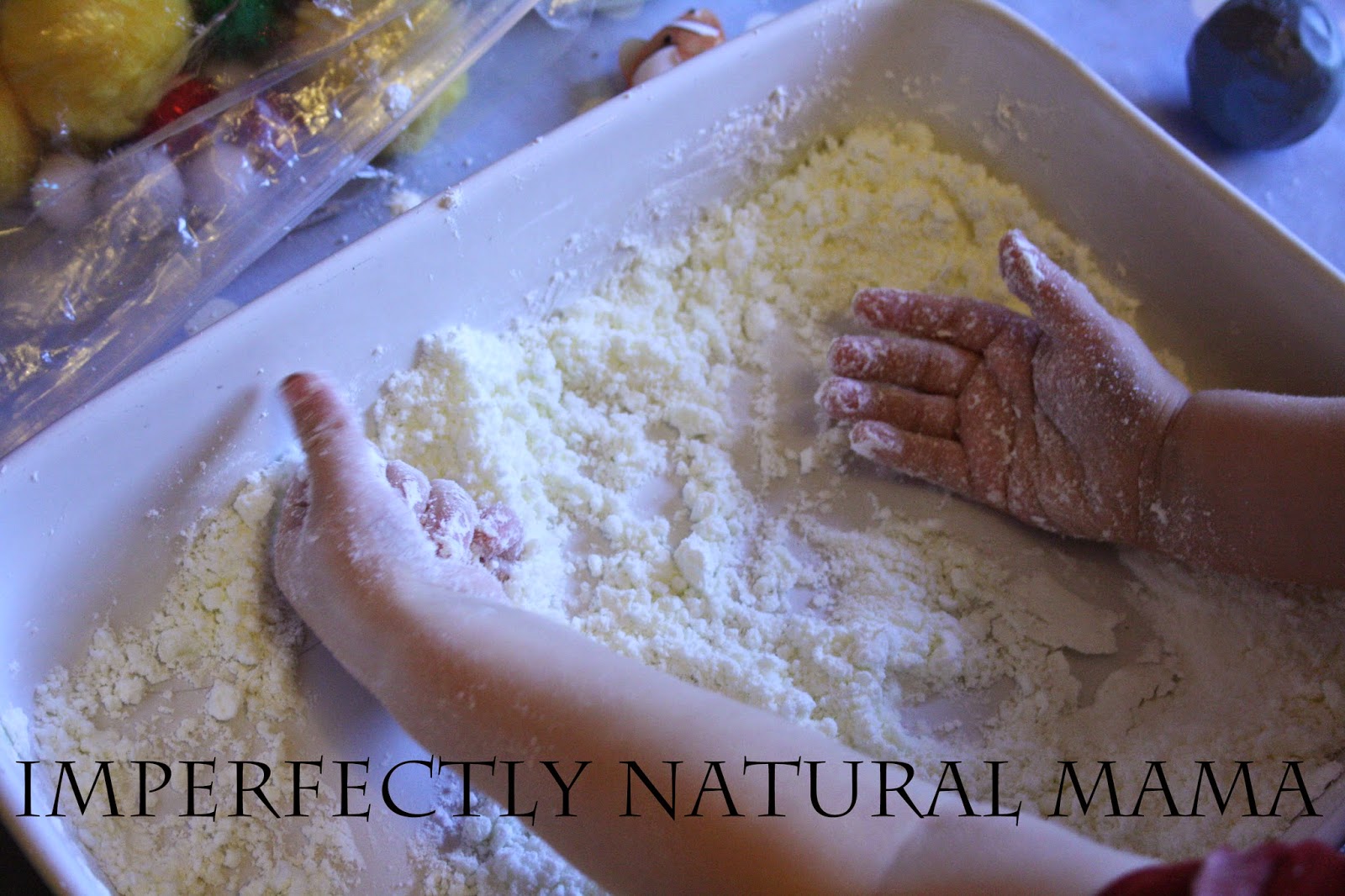 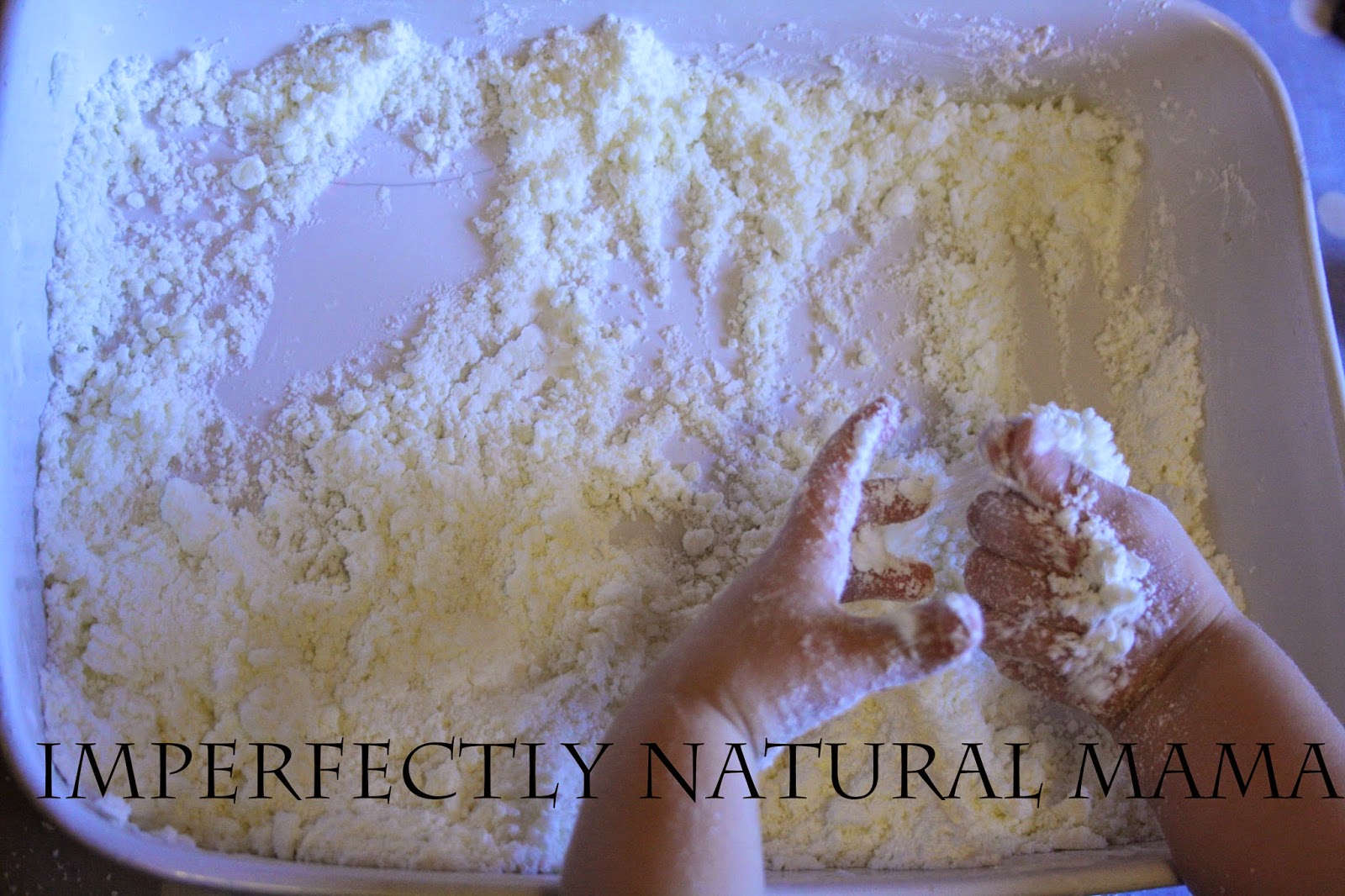 3.  Plastic snow confetti.  I bought this from the supermarket a while ago, not really knowing what to do with it, but thinking it might be fun for something, so just put it in a bowl and let the boys have a dig around, it did make a bit of a mess and had to go away when Biscuit started eating it. 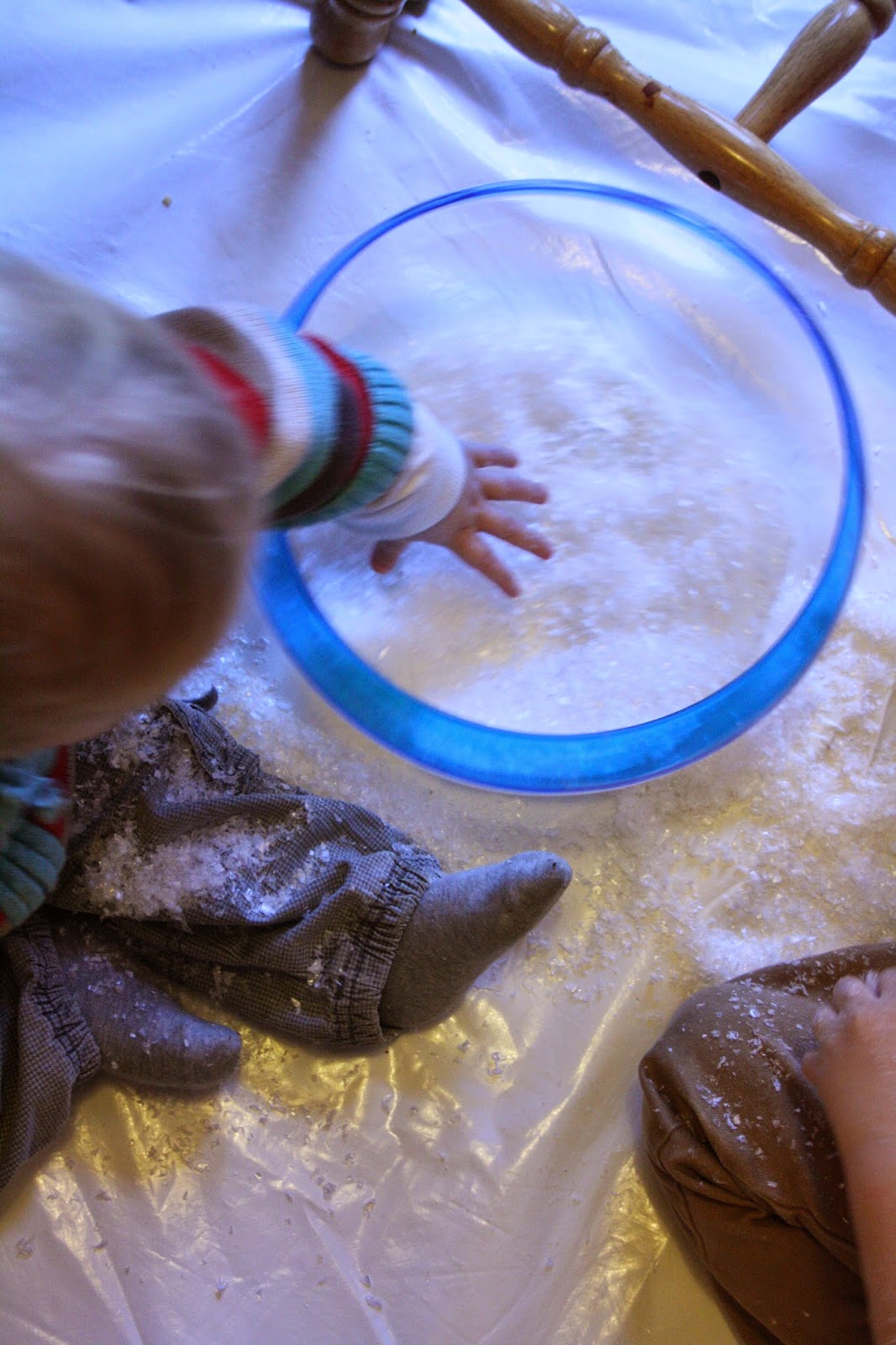 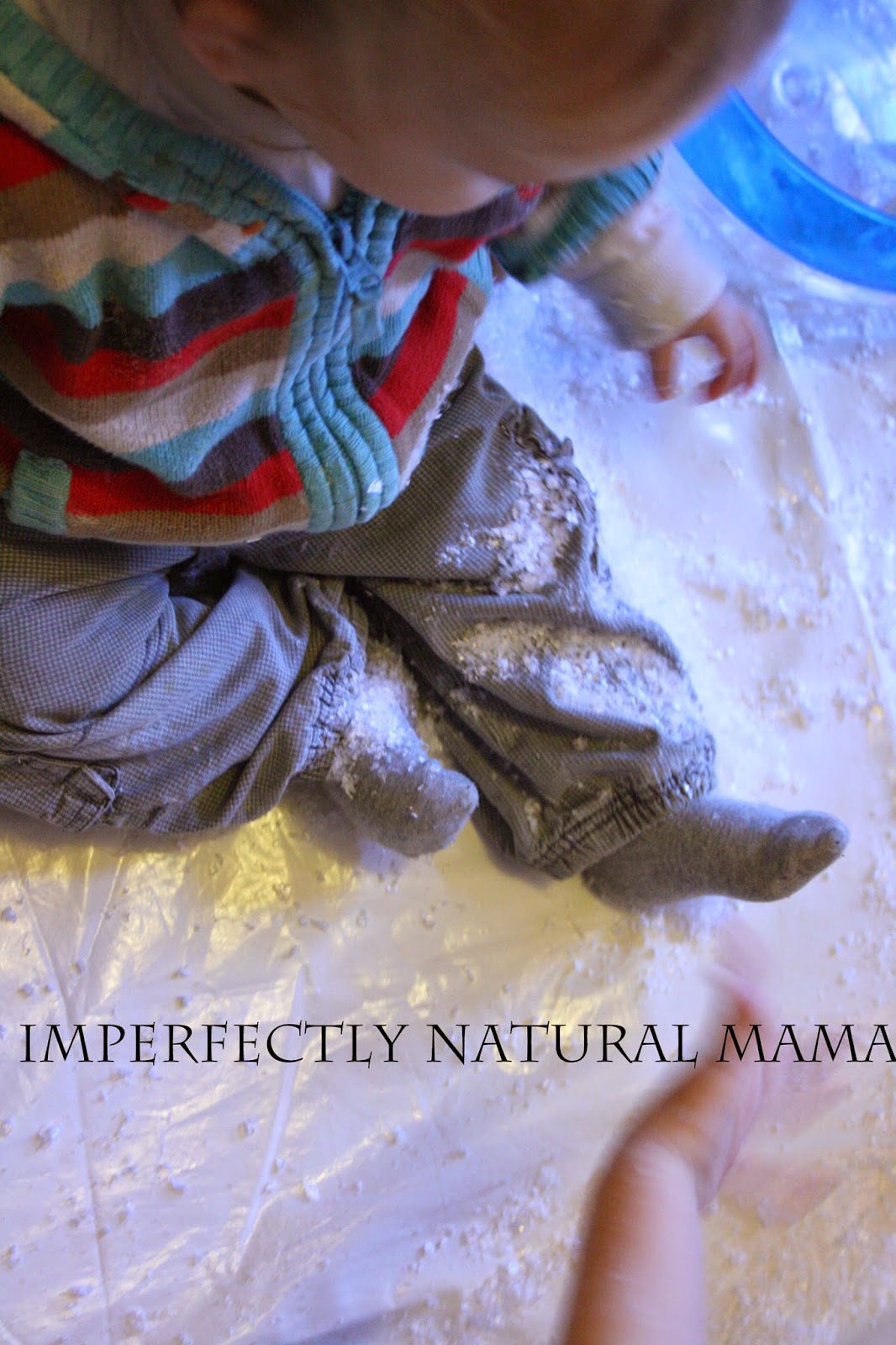 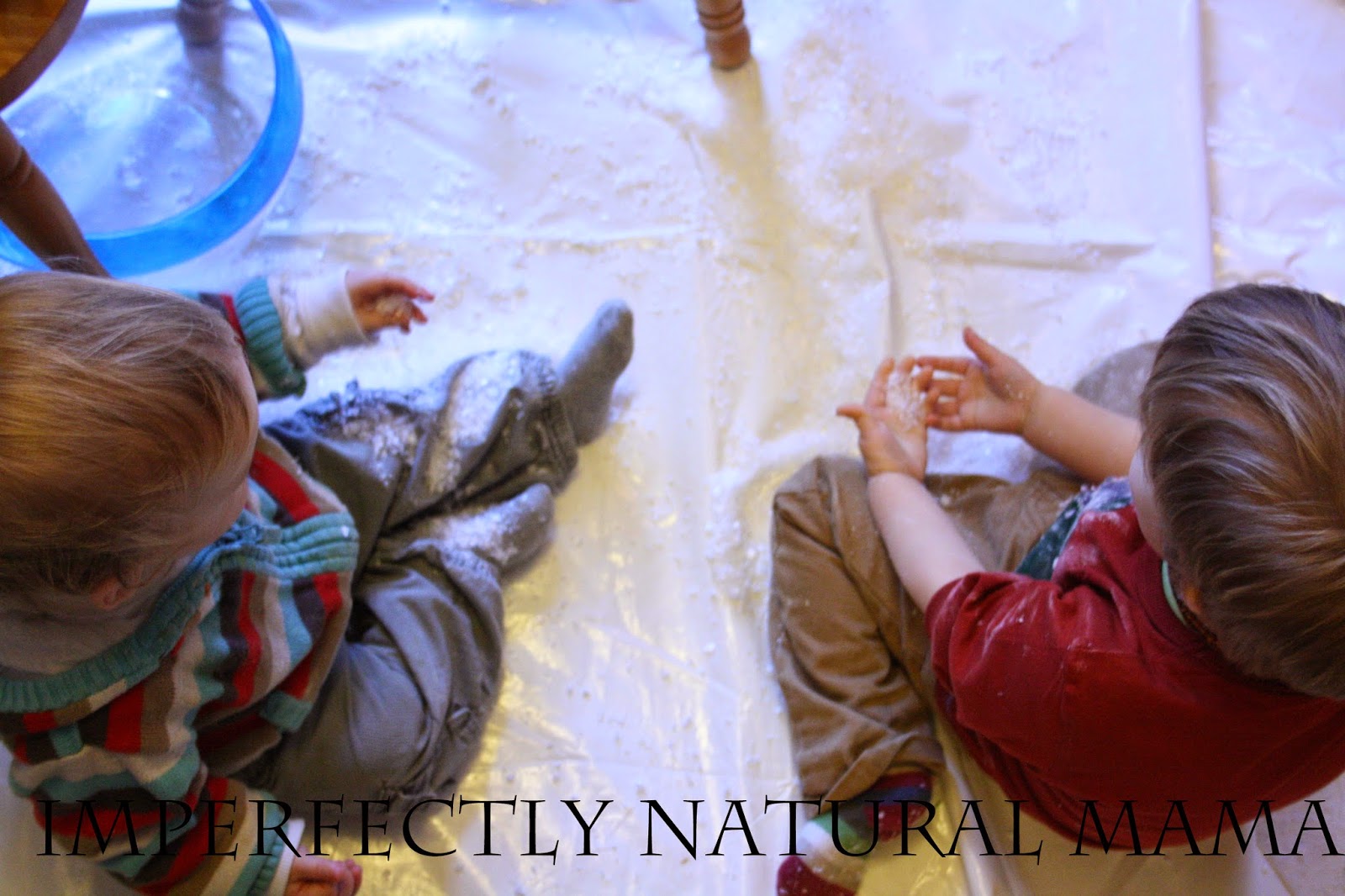 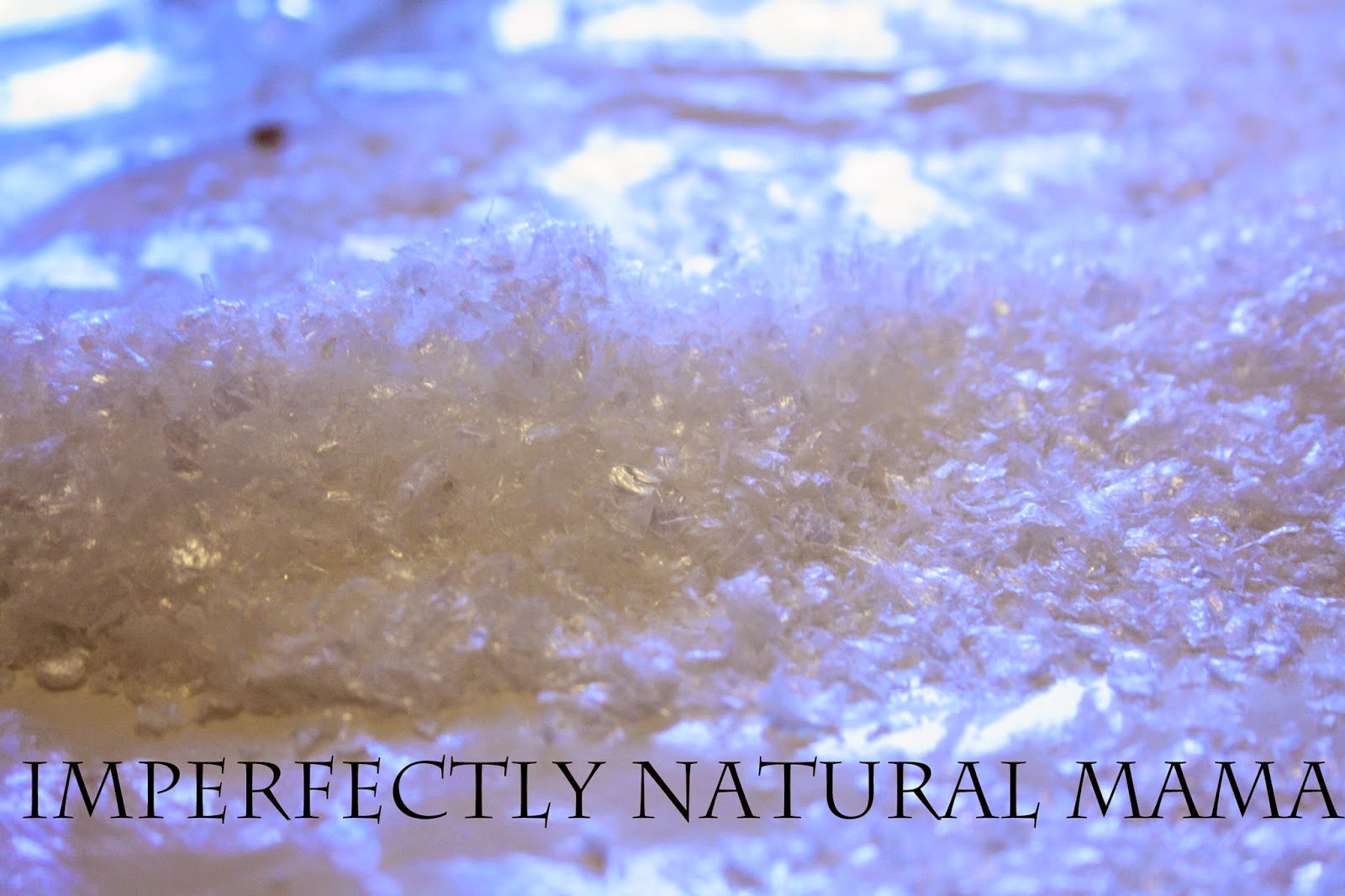 4. Snowmen skittles, what fun!!  Boris helped me to draw on some of the faces (cue Tim Burton style snowmen) and he stuck the noses on.  We stacked them up then sent them flying with a plastic "snowball".  A fun game for a while, but Boris found it more fun to break the polystyrene cups into bits when I was out of the room. 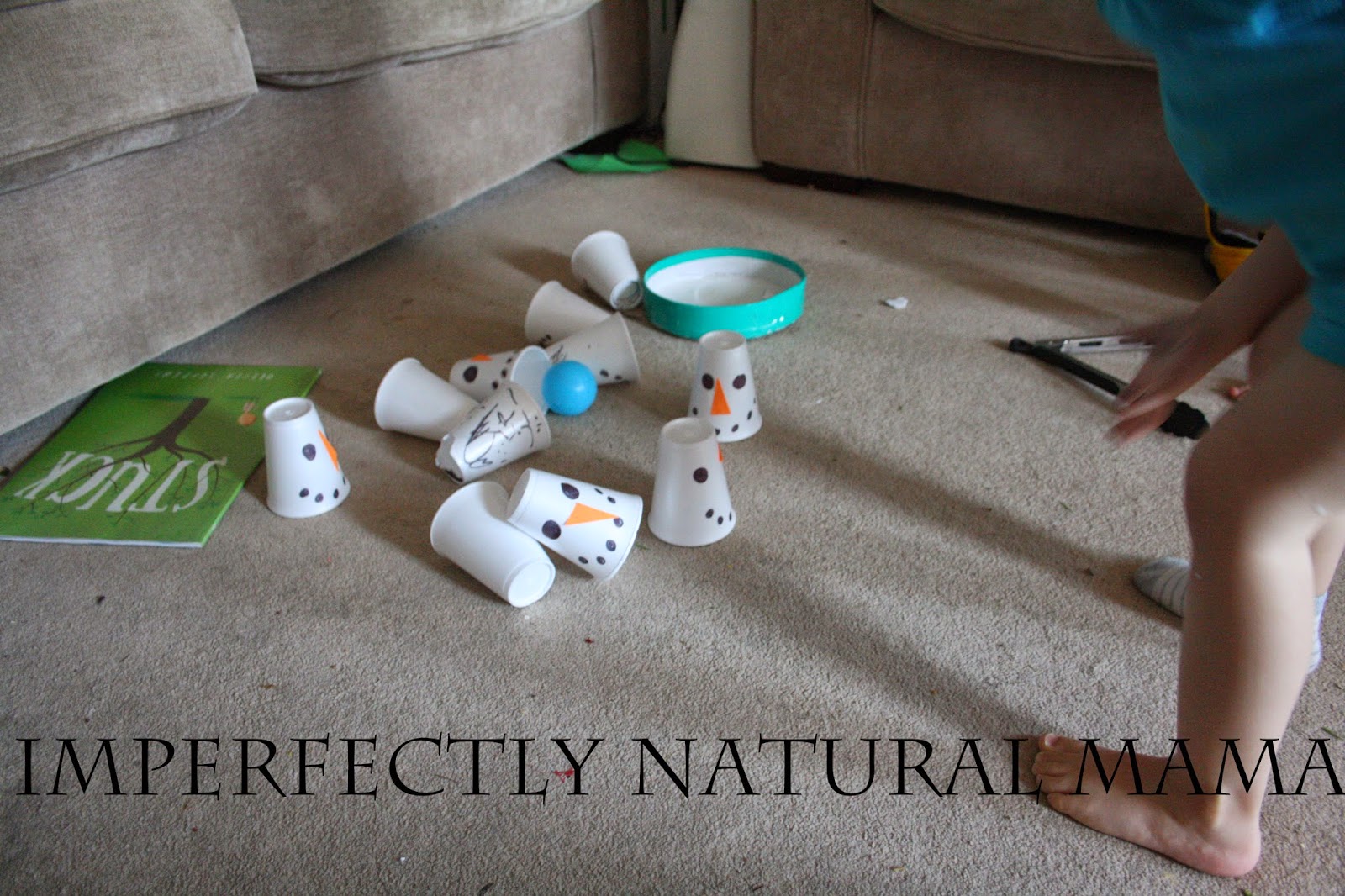 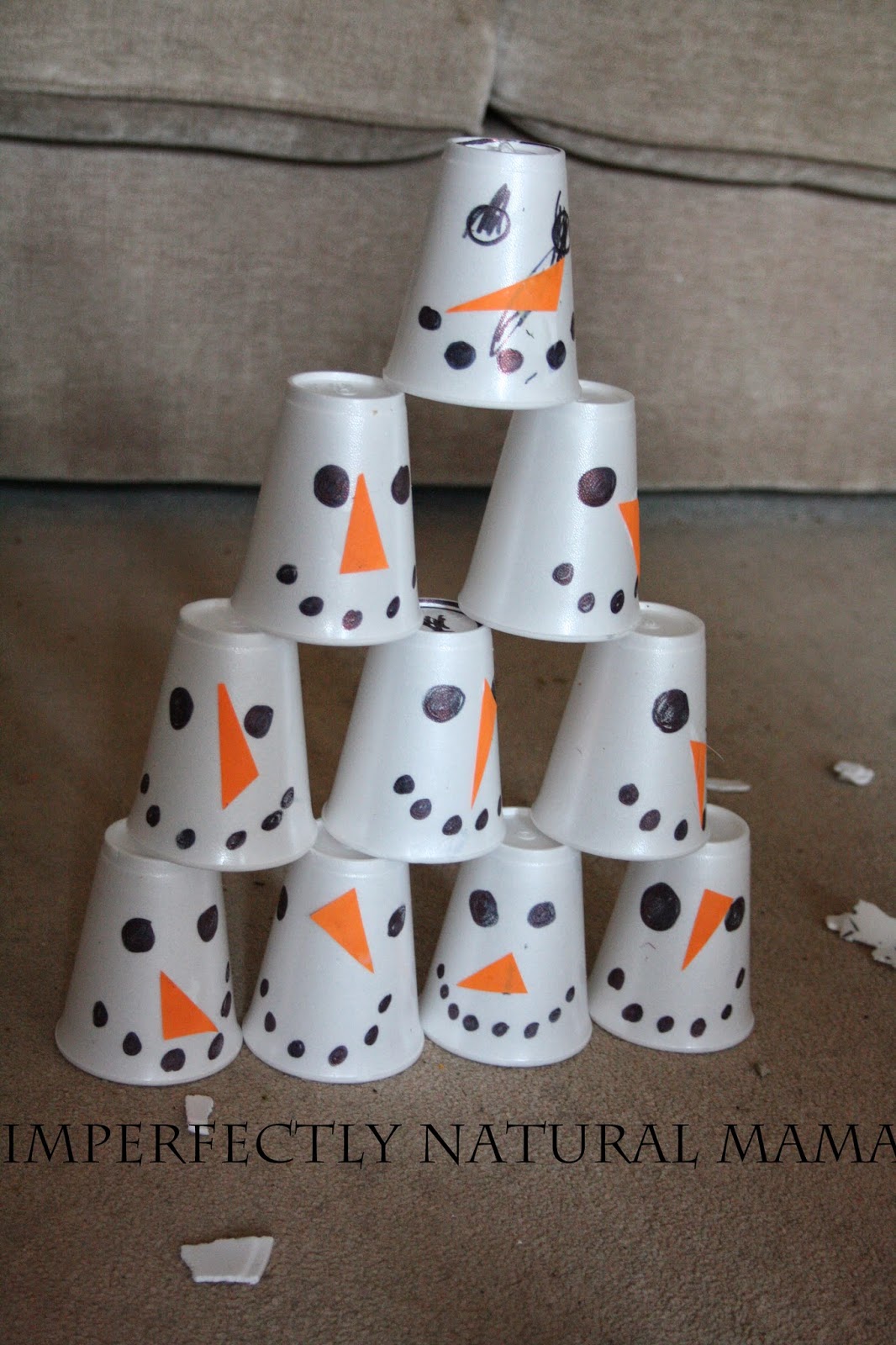 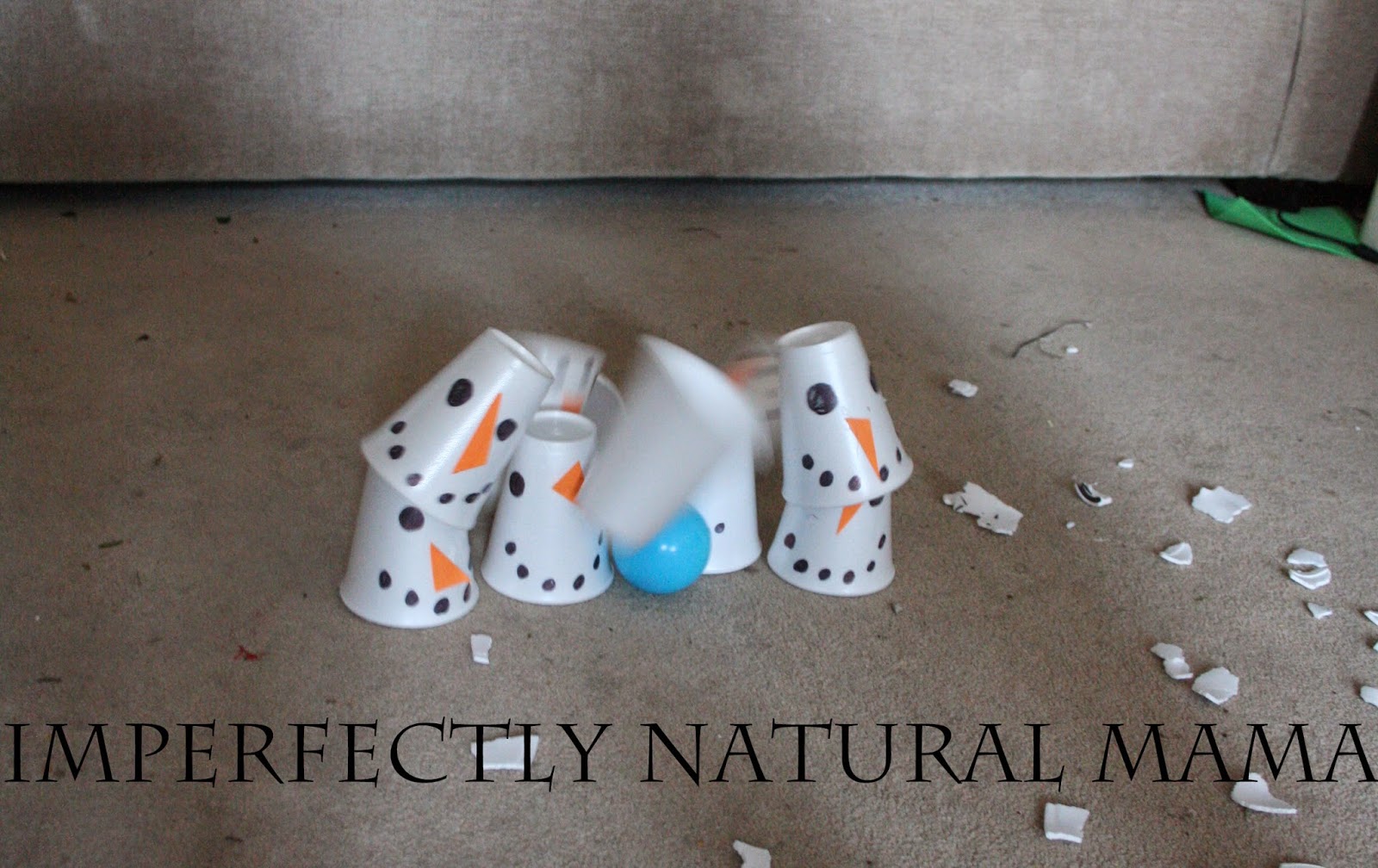 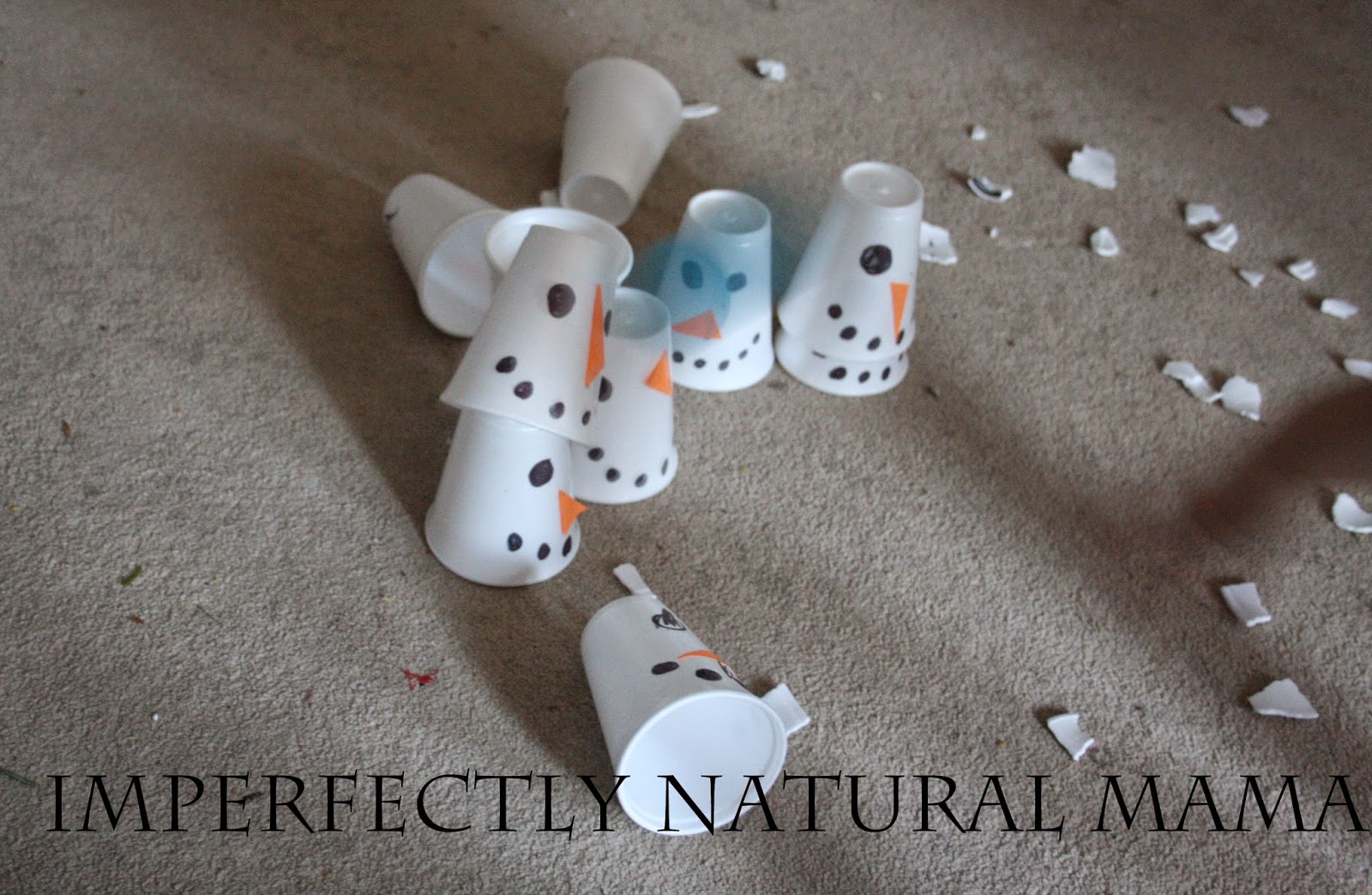 5.  This was a pretty awesome activity, Boris and I dipped cotton wool balls in equal parts flour and water then baked in the oven for 45 mins.  He then hammered them to crack them open and broke the the coating with his fingers.  The sensory experience of opening the crunchy hard coating and revealing the soft fluffy centre is out of the world.  I am tingling just thinking about it, and even took some to my Bible study group, so they could share in the sensory wonderment.  I was hoping they would look more like snowballs when they came out, but they were a little browned.  (Again, called time on this activity because of eating) 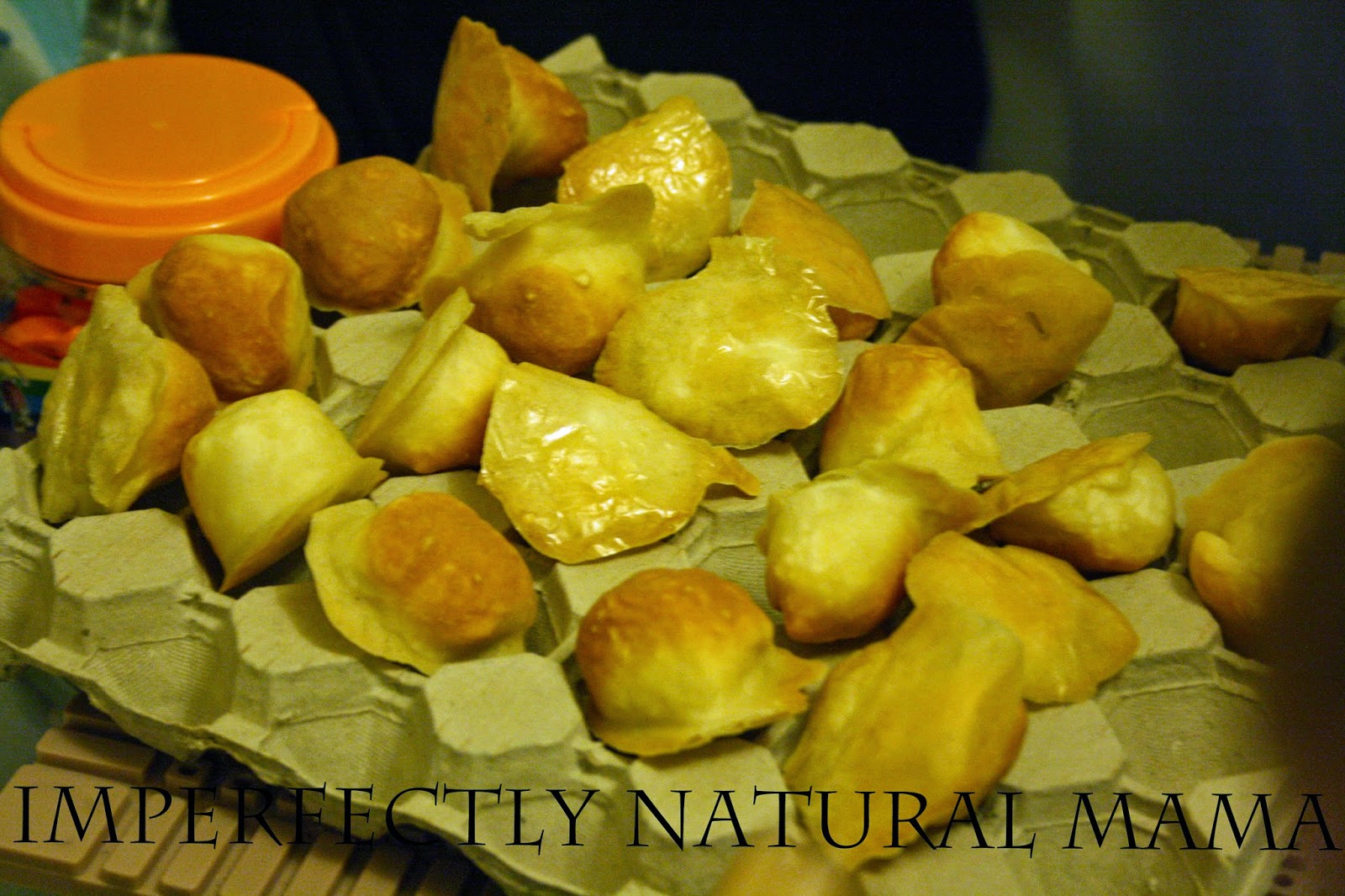 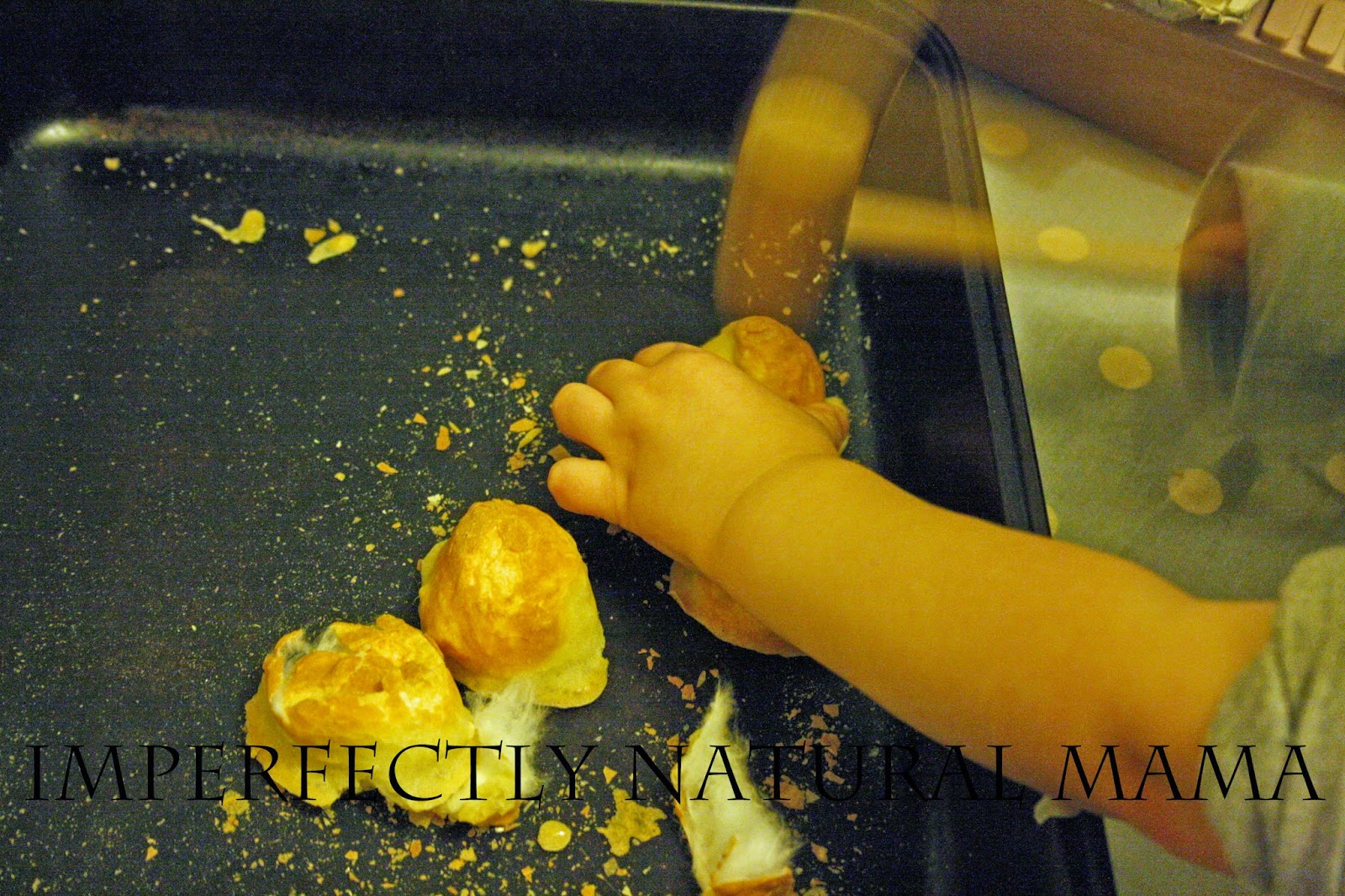 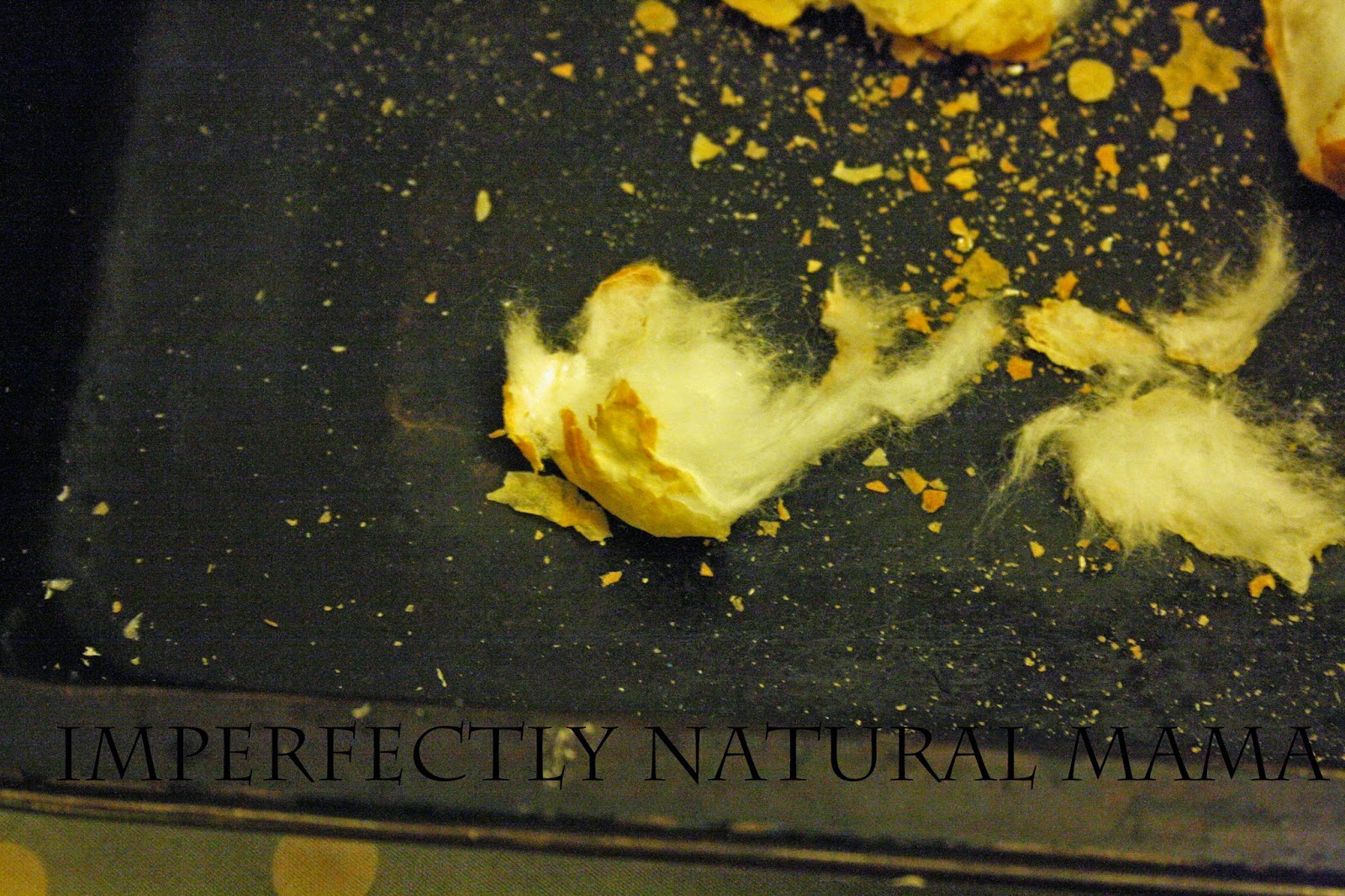 6. Puffy Snowman painting - I made a mixture of shaving foam and a dollop of PVA glue and mixed it together to form the base of the "paint".  Boris scooped the mixture onto the black paper into some circle outlines I made and then we added the embellishments on together, buttons, bow, beads, boggly eyes etc.  The snowman looked great when it was finished, really fluffy like meringue.  Fascinatingly the next day the snowman had continued to puff up under the dried outer layer so began to look like he had gained a few pounds and even had some stretch marks!! Boris asked why and I replied "science".   When I was out of the room, Boris used the foam that was leftover to sty his hair.
Four days later and much poking from Boris and it looks more like a sorry burns victim,and a little bit creepy.  We are still waiting to see if it goes crusty. 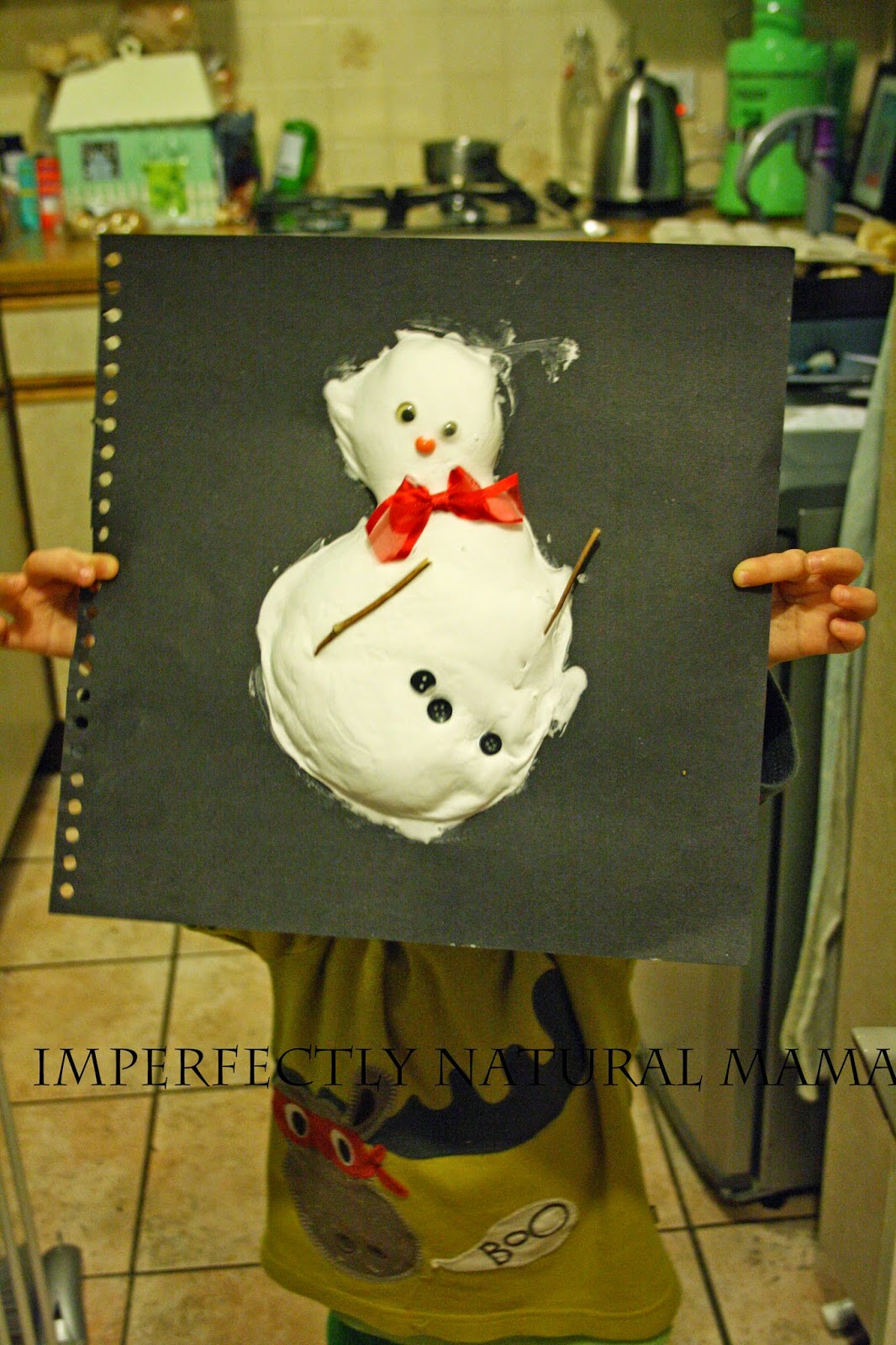 So there you have it, four fab snow themed activities.  This week our theme is Space.

Posted by imperfectly natural mama at 15:48 No comments:

Today I want to share with you some of my goals for 2015 and my word of the year, I find sharing them like this useful because it gives me a sense of accountability and is also a permanent record that I can look at long after the list falls off the bathroom door!

Last year my word of the year was "organise".  "Organise" was about survival, it was about getting things done.  it helped me get through a very difficult year but left me feeling a little joyless, there isn't much joy in organising, its about discipline, management and order.  Those things don't sound much fun to me.  And they weren't.  So this year, I want to focus on finding the joy in life as well, without forgetting what I learnt this last year about how useful being organised is, arranging meetings with friends, planning fun activities to do with the boys etc.  Honestly I haven't enjoyed parenting much this last year so I am going to work hard to bring the joy back in to it, I think being organised is a big part of that but perhaps more importantly changing my mindset is going to help.  So for these reasons my word for 2015 is ENJOY!!

Enjoying life is also about reaching goals, hitting targets and I love a good list of New Years goals, and this year I did 15 for 15, (I could have done more!)
Here they are in no particular order:

So as a quick run down, 1. I have some ideas for a book I want to write, and would really like to make a start on it this year.  2. I have read the Bible in a year twice now, though never quite finished, so want to have another go. 3. Smash books are a bit like scrap books but smaller and less considered, I am combining this with number 4. take a photo every day of the year and put it in a smash book. 5. I spend waaaaaaaay too much time on Facebook, so trying to rectify that by reading books on my Kindle rather than looking at FB. 6. Dry brushing has so many benefits so I intend to do it daily. 7. Like FB, I spend way to much time staring zombie like at the box, so trying to do a bit less of that (I make this resolution every year) 8. I started  vegan and vegetarian nutrition diploma and a (9.) Child psychology diploma some time ago, so really want to get these finished, actually I have to get these finished because there is a deadline. 10.  Eat nutrition - so many reasons for this one, hopefully will be able to reveal some more throughout the year, basically really want to start improving my health, feeding my body with nutrition instead of empty calories. 11. (linking to number 5)  I have really lost my mojo for reading this last year so need to give it a kick up the backside by challenging myself to read one book per month, it's hard, but I am already half way through my first book, (which I will review soon) 12.  I want to get back into my art a bit more and have some plans for what to do, again hopeful will be able to start sharing soon.  13.  Linking to number 10, meal planning definitely helps me to make more healthy meals, saves time and makes life more enjoyable by having tasty meals to look forward to. 14.  We WILL go camping this year. 15. The bloody, bloody wedding scrap book, 5 years behind on it, but I still really want to finish it.  I think I might be able to face it this year, just need to smash it out instead of being so precious.

So there you have it.  I wish you all a fantastic and joy filled 2015, can't wait to share my journey with you.
What are your goals, plans, resolutions?
Posted by imperfectly natural mama at 16:14 2 comments: